As I listen to this new collection, which is just as good as anything he’s done in his career if not better, I can’t help wondering why Smither isn’t better known. 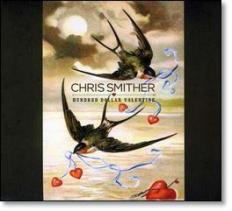 In 2006 he released the glorious “Leave the Light On,” with a title track that feels like an instant classic (though, in a real head-scratcher,  Rolling Stone chose another track, “Diplomacy,” for their list of top 100 songs of the year). Smither has got star quality, magnetic presence, A-list chops, and can write songs like, well, “Leave the Light On.” Again, it’s one of those songs that simply should have a larger life than it does.

That gap between quality and a larger visibility is one of the things that Smither himself touches on from time to time including last year in a piece he wrote for the New York Times Business Section “Frequent Flyer” series titled “The Drawbacks of Modest Celebrity.”[1] There he recalls that he’s been recognized a few times, once as Sam Sheppard and another as a friend’s landlord.
He touches on it a bit on “Hundred Dollar Valentine” when he sings “it ain’t what it is that’s such a sin/It’s what might have been.” As I put that down here, it looks like nothing on the page, but when Smither sings it with his bluesman’s growl, it sounds so utterly authentic and true that you ache right along with him. It just hurts.

There’s reason for that. Smither’s career—and I think this is something that he’d say, too—hasn’t followed the arc that it might have under better circumstances.  He’s a blues singer, so lost opportunities and regret all come with the territory, but unlike Bruce Springsteen who sings about blue collars from a mansion, Smither knows intimately of what he speaks. Louis Armstrong once said of swing that “if you don’t feel it, you’ll never know it,” and that’s something that could as aptly be said of blues music. Chris Smither feels it, and he knows it. He’s had good times, though the hard times have had a disproportional representation in his life.

So there’s all of that, but as an entity to itself, this album is just outrageously good. Smither handles the material with such ease, such cool, that it’s simply riveting. His guitar playing is outstanding—Bonnie Raitt has called Smither “my Eric Clapton”—not through shredding, but through the way he states the rhythm. His uses the guitar like a tool, the steady rhythm of his thumb pick marking seconds as they pass inexorably by. It’s a study in Travis picking, and an absolutely perfect accompaniment to the material on tracks like “What They Say” and “Make Room For Me.” The arrangements are varied and unique, thanks to long-time collaborator David Goodrich, using feet, tympani, violin, cello in addition to more typical blues sounds, such as the soulful harmonica of Jimmy Fitting.

While Smither has had a decades-long career, this album is the first he’s released that doesn’t include any covers. It’s hard to tell, as everything here is so indelibly authentic that each song sounds as old as Moses (though that’s wonderfully broken at times by lyrics like “I had a lighter in my carry-on/but the airline took it away”). There isn’t a misstep, though we wouldn’t expect one. Smither is just that good. I realize reviewers aren’t supposed to drool, so I’ll stop now. But good lord this is an utterly compelling album. Only saying.