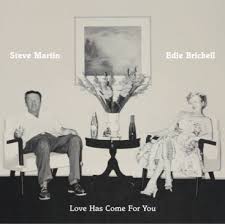 When I first saw a note about this album online, I had to do a double take as it seems like an odd pairing. Martin is a good banjo player, and has had a beautiful collaboration with the Steep Canyon Rangers over the past few years, resulting in two albums of new material. That work is good, if not great, and the personality of Martin—quirky, funny, oddball—is one of the reasons. He’s funny. He’s made a career of being funny. He’s never presented himself as a banjo virtuoso, and laudably has used his fame to shine a light on players who are, including the recipients of his annual banjo award, Noam Pikelny, Sammy Shelor, and Mark Johnson. If he doesn’t make the greatest music in the world, it is good, and the playing is strong, something that the Steep Canyon Rangers have brought to the earlier projects. Live, Martin and the Rangers are a delight.

But this new album isn’t that. Again, it’s an odd collaboration. Brickell had a hit album in the early 90s, Shooting Rubber Bands at the Stars, and the single “What I Am” was ubiquitous to a fault. It was a good song until excessive radio play ruined it. The next we heard she was married to Paul Simon, and then, if we thought of her at all, it was to wonder what ever happened to Edie Brickell.

Well, here she is with Steve Martin, of all people. Presumably they are friends, and that the co-writing on this album—all the music is by Martin and the words by Brickell—came out of that friendship. The songs often don’t really seem to take themselves seriously, such as clunkers like “Siamese Cat” and “Yes She Did.” There is a kind of “I need some words for this … hey, these will do” quality to the writing, and most of the material, in terms of the writing, is unremarkable. It’s often hard to imagine that both Brickell or Martin inhabit the spaces that they write about, such as a country dinner table in “Get Along Stray Dog” and the writing isn’t strong enough to convince us. These are country songs, or at least draw from that world, but present as parody because the people creating them, we know, live so far from those environments.

That isn’t to say that there aren’t some nice moments. The first song, “When You Get to Asheville” was released early as a single, and it is perhaps the strongest offering here. It is plaintive, and conveys some truly heartfelt emotion. The final song, too, is one that duo truly inhabits. Titled “Remember Me This Way,” it voices the desire to be remembered for the good times, not who we become in old age. That’s an idea that I can truly imagine Martin considering, and Brickell as well. It’s doesn’t have the quality of a single, but it brings that one thing we’ve been looking for when listening to the whole album: honesty, or at least something that looks like it.

The instrumentation, on the other hand, is superb, and I like Martin’s playing. He has a nice lyricism, especially when playing clawhammer, and a quirky turn of musical phrase that is refreshing. The other musicians are wonderful—all of the Steep Canyon Rangers are included at various points—though the arrangements at times are cloyingly lush.

I suspect that both Martin and Brickell have made this album simply because they wanted to and because they can. As Martin notes in the press release, “when we started, we were just playing around.” There’s nothing wrong with that. As a curiosity, I suppose it works, but it doesn’t hold up within the crowded world of singer-songwriters.