“It’s something big for me,” says Olivier Girard when speaking about last summer, the one he spent as a Leader in Training (LIT) at Camp Nominingue. “I’ve never had a month like that in my life.” Certainly, he hasn’t, and he admits with palpable disappointment that he likely never will again. His LIT summer was one spent not entirely as a camper, and not entirely as a counsellor, but somewhere in between.

The overt intention of the LIT program is to train campers for future counsellor roles. This includes safety training, and completing bronze cross certification, as well as how to be an effective leader, guiding campers through their days at camp. Less overtly, though equally if not more importantly, the training summer was designed to be a time to grow, mature, and accept a growing array of responsibility.

He notes that the leadership program gives them a lot of latitude to explore both the world and their changing place within it. “They have a lot of opportunity to express their opinions, to express their feelings, to deal with leadership theory, apply that theory, and to be tested by challenges that they haven’t undertaken in the past.” Says Olivier, “We were trained to be counsellors, to better yourself, to search your inner self, to find your qualities, to find your weaknesses.” For him, the distinction between the program and the values that inform it are necessarily blurred.

Often it’s a longer period at camp than they’ve ever had before. For Olivier, it was the first time he’d spent a full month in camp. While they’re involved in it, participants see themselves as members of a unique class, with a unique set of demands placed on them. “The feedback comes very quickly,” says Laurent Gilbert who was an LIT at Nominingue in 2000, the year that the program was launched.

“They wanted to make us responsible,” he says with a chuckle, though quickly becoming introspective. “Going on a canoe trip [as an LIT] you were the one making decisions, leading, and orienteering … it gives you a chance to be more mature. I think it’s an experience that you cannot miss.”

“ … for the first time the counsellors aren’t with them …”

Certainly, you’d be hard pressed to find an analogous experience in any other setting. The experiences associated with being an LIT are often the most lasting, largely because they are the most meaningful. McKenna says that, thinking back on the experience, past LITs “talk about the canoe trip, when they were out there and, for the first time, the counsellors aren’t with them. They talk of being a counsellor for two days, and about working with kids.”

While they also have a solo camping experience during their LIT summer—spending a night on their own—those challenges are more personal, more individual. Their work with others is distinctly different. Being given responsibility at a young age sends a range of important messages. Chief among them is what the responsibility implies: that you are ready for this, that you can be trusted, and that you have the skills and the ability to take on more. It feels like growing up, and in many ways, it is. The understanding that others have observed your skills and abilities is one of the things that make being an LIT so important. 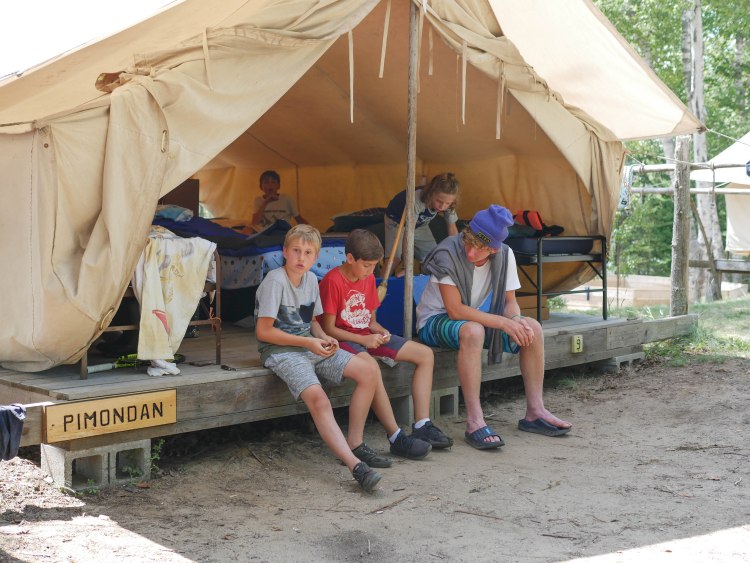 Charting the benefits of challenge

While it’s not the oldest camp in the country, Nominingue shares a tradition and a set of values with some that are. In the early part of the last century, rather than relying on a militaristic model, per the one we associate most with Baden-Powell and scouting, camps in Canada adopted a conspicuously alternative organizational structure, one built specifically around opportunities to build social, physical, and interpersonal skills. It was less about work, and more about growth; less about obedience and rank, and more about building empathetic forms of leadership and, by inference, inclusion.

Fun is part of it, as is integration and personal challenge. Some of the challenges are physical, others social, and canoe tripping was seen as an essential vehicle for both. Tripping can be strenuous, weather doesn’t always cooperate; intermittent discomfort is part of the experience.

It also presents a wealth of opportunities for young people to assume greater responsibility, and to become true mentors, leading empathetically; working to gain the trust of others rather than demanding trust from them; allowing young people to feel the weight of responsibility in a hands-on, real world way. Success isn’t exclusively personal, but also social. It’s less about “I did it!” and more about “we did it!” and a profound appreciation of the power a group can have when personal talents are employed toward achieving a common goal.

“My counsellors were good … they connected with me”

Camp Nominingue is an all-boys camp, one based on a clear understanding of the value of positive male mentorship in the lives of boys, particularly in our current cultural context. Tripping remains a core aspect of the program, as does a dedication to small-group participation. The camp builds its own canoes, which imparts, among other things, the values of workmanship and craft. Trips go out typically with two counsellors and just four or five campers. “You go out on a canoe trip, you’re dealing with just a few kids and those kids get really close,” says Gilbert.

In camp and on trip, the LIT summer, more than any other, is one filled with small acts of service—mentoring, helping, coaching—and an awakening to a new role. Participants come to see themselves as members of an institution, gaining a reverence for what the institution represents. They learn to see themselves not as creditors to whom something is owed, but debtors who owe something.

That’s clearly true for Olivier. “You can be a good leader and a bad leader,” he says, something he learned by example. “My counsellors were good … they connected with me. We were really close at the end.” For him, leadership is, principally, about supporting others, “to bring you up when you are down. And always being there for you. And teach you how to do things for yourself, not just do things for you.”

Olivier will be junior counsellor this coming summer, and a full counsellor the next. If past examples are any indication, he’ll gain a lasting and profound relationship with the camp, comporting himself proudly as a member of the community that Nominingue represents. When he notes that “it’s something big,” he’s likely not yet cognizant of how important and lasting his experience truly was. Again, if past examples serve, he’ll grow to see it as a month that will affect the rest of his life.