All camps have a device policy, and some are stricter than others. At Nominingue it’s as strict as they come: no devices. Director Grant McKenna feels it wouldn’t be camp any other way.

“I leave it at home,” says David Laeer. “I don’t really miss it. I guess that’s one of the things that Nominingue has taught me. That you don’t need it … that it’s kind of a nuisance in fact.”

The thing he’s talking about is his phone. For the past 8 seasons, he’s been a camper at Camp Nominingue, a boys’ outdoor camp in Quebec’s Laurentians. The reason he leaves his phone at home is because they aren’t allowed. Campers found using smuggled-in phones will have them gently removed to the office until the bus ride home. Which means that over the past 8 years, David has done something that most kids his age not only don’t do, but can’t really even contemplate: he has spent the equivalent of six months of his life entirely offline. No TikTok, no Snapchat. No IMs, TPs, or IGs.

And he likes it. “It can be a tough sell for some people,” he says of the simpler, tech-free life at camp. “Which is why people look at you cross-eyed sometimes and think ‘Why would you do that?’” The reason, he feels, is because it lets you live, at least for a time, a different kind of life. “It forces you to make better connections with people, to pay attention to them because you don’t have an alternative. A lot of people use their phones as a means to escape or avoid certain social situations. But you don’t have that option at camp.”

Being in the here and now

Nominingue is approaching its 100th anniversary, and the policy regulating tech is almost as old as the camp itself. “I would say that part of it goes back to 1925,” says Director Grant McKenna. “There was no electricity. Before cell phones existed, campers weren’t allowed to have radios.” The feeling was, if you wanted to hear music, you made it. If you wanted to know where you were, you looked at a map.

McKenna admits that it can risk sounding quaint—kids aren’t smuggling many radios into camp these days—though the underlying sentiment remains as true today as it was then. It’s an expression of the camp’s values and the culture it has developed over its long life. The camp motto is a quote from Henry David Thoreau: “Rise free from care before the dawn and seek adventure.” Says McKenna, “for us that really fits with what we want the campers to be doing while they’re here.” It’s about allowing yourself to be in one place at one time; focussing what’s in front of you in the real world rather than dividing that attention with the virtual one.

“Camp life is very free,” says Benicio McCauley, who has been going to Nominingue for four years. He’s 13 now. “Even though there are tents and buildings, you kind of feel like you’re in the wild. … if it rains you hear the rain droplets through the canvas. It’s really nice.”

Yes, there are skills to be built, challenges to be overcome, and fun to be had. But for McKenna, a primary goal is also to allow campers to have an authentic outdoor experience. “I think we prevent ourselves from seeing everything that’s around us,” he says, “from hearing everything around us.” He adds that “In 2000 when Nominingue started its leader in training program, one of the things they put in the manual was weather forecasting and weather observation.  … it was something that was seen as important, for the kids coming here to be aware of their surroundings.” It’s important when on trips to be able to read the sky, though it’s also a life lesson in being aware, and of living in the moment.

The way we were, the way we are

It’s easy to imagine that campers might be less than enthusiastic about the device policy, though the reality, for most, is the exact opposite. Benicio says that “camp would suck” if phones were allowed. Louis Turner, looking forward to becoming a junior counsellor this summer, voices a similar sentiment. “It’s just so nice to have a break,” he says.  He admits that had I asked him about this three or four years ago “I would have definitely been all for the phones. As a little kid, it’s hard to make those kinds of decisions for yourself.” Now, he appreciates that they were made for him. “After the first second I step off the bus, I don’t think about my phone once. Not once for the entire camp.”

“We get the occasional camper who fights against the system,” says McKenna. “But most campers adapt, I think, really easily and really quickly.” Rather than write emails or texts, they write letters to their parents. With full sentences, and something like paragraphs, on real paper; they’re sent in envelopes, with stamps, in the actual mail.

The letters are the camper’s only contacts with home for the time they are at Nominingue. “Part of camp is a chance for kids to become independent,” says McKenna. “To grow independently of their parents without having a parent who will answer their every whim immediately because they can be reached immediately. … it forces the kids to look at themselves to find the solution themselves, or to reach out to a person other than their parents to ask them those questions. That’s part of growing up. Growing up is developing confidence in one’s own abilities.” 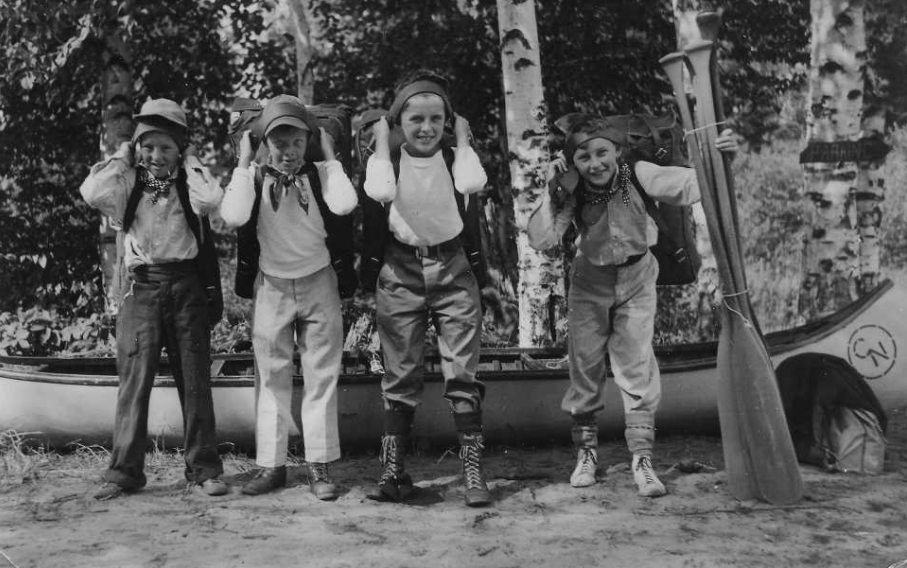 Campers also become aware, in reflection if not immediately, that they are taking part in something much larger than themselves. On the Nominingue website there are a few archival photos showing campers from the 20s and 30s. (The photo above shows campers in the 1930s. Note the logo on the canoe—then, as now, Nominingue has a woodworking shop that produces cedar strip canoes.) The photos look old in all the ways you’d expect, though many of the things that the campers are doing are the same. They go canoeing, and live in canvas tents. They learn about the natural world through finding their place within it. “To be able to look up and just watch the leaves fluttering, or the bird hopping from branch to branch, or listening to the sound of the wind,” says McKenna. “Those are the things that stay with the staff members and the campers. Just being able to stop and stare into a fire. … I see the device policy as tied in to who we are. We are an outdoor camp.”

When you ask campers and alumni of Nominingue, those are exactly the kinds of memories they have. They recall the feeling, as does Benicio, of being in the wilderness, of hearing the sounds, of being in awe of a star-filled sky. “It’s like nothing else I’ve ever done,” says Louis. He’s also aware that it’s something most people his age never get a chance to do. This summer he’ll be a junior counsellor. As he grows into that role he’s looking forward to helping bring the camp experience he’s known to a new generation of campers. He’ll help them see the skills they have, and what they can bring to a group. He’ll point up to the sky, and maybe confiscate a device or two. He’ll sing, and recite the motto, and he’ll help them learn the value of living, at least for a time, a different kind of life.

“Rise free from care before the dawn, and seek adventures. Let the noon find thee by other lakes, and the night overtake thee everywhere at home. There are no larger fields than these, no worthier games than may here be played.”

― Henry David Thoreau “Walden Or Life in the Woods”