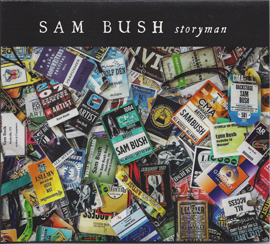 Sam Bush is such a perennial of Americana music, from first gaining lots of attention with Newgrass Revival, going on to be the King of Telluride, and he’s just kept on going. Through it all, subtle is not something that anyone might readily claim of him, what with his mullet bobbing in time while chopping on stage.

That said, it’s always been clear that Bush is far more than his stage presence might suggest. He’s played on countless recordings, and is a master of many things, prime being an ability to apply himself to the music at hand. He can play quiet. Publicly, and on his own albums, he’s more inclined to be louder, and that’s true on this one as well.

On Storyman, this latest and long-in-coming release, he’s joined by a raft of greats, with whom he’s also had a very long association. They all co-wrote the songs here, even—as with Emmylou Harris—if they aren’t known as writers themselves.

Nevertheless, those associations are what make the album really work. These are all people really working at the top of their field. Likewise, it’s not a guest-based album of the kind we typically see—i.e., greats joining in to bolster the profile of a project. Here, these are people that Bush knows well, and has done for decades. The result is playful, interesting, and warm. Bush has nothing to prove, and that’s certainly on display here, making songs like “Bowling Green” really, um, sing. That’s his hometown, and the tobacco fields, the tunes, the history feels genuine. Because, of course, it is.

There are guest vocalists here, for the most part adding harmony, but the core band is the one that Bush has toured with recently. Truly a cabal of whippersnappers if ever there was one. Scott Vestal shines, as always, on banjo. Some of the arrangements sound a bit dated, harkening back to the kind of things he was doing in the late 80s and early 90s, such as the Reggae arrangement on “Everything is Possible.” I’m still not entirely convinced that it’s truly new. But, he says it is, so I guess he would know.

This album isn’t likely to bring many new listeners, but for those of us who have been interested in everything he’s done, it’s nice to have something new. “Transcendental Meditation Blues” is a standout, as is the ballad “Lefty’s Song,” featuring Allison Krauss.

Bush will no doubt be touring the ass out of these tunes this summer. Fair enough. Nothing here to bump “Howlin’ at the Moon,” from the set list, but it will add some welcome variety. And, you know, it’s Sam Bush after all.