Some songs, like Tom T. Hall’s “I Love,” unintentionally demonstrate that there’s a fine line between sincerity and satire. Some people maybe find the song to be a simple presentation of a complex idea. Others, Bob Dylan among them, think of it derisively as the “little baby duck” song:

It was a hit on the country charts presumably because listeners related to the sentiment. Still, it would have been just as popular if presented on Saturday Night Live, only for very different reasons. (Think Steve Martin’s “King Tut,” which actually was a hit a few years after “I Love” charted.) 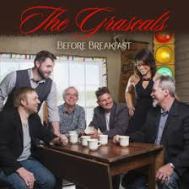 This latest from the Grascals, Before Breakfast, finds the band right there, straddling the same line between profundity and parody. Bluegrass bands certainly don’t shirk from a cliché—who can get enough of a Lester Flatt G-run?—but if there are limits, some of them are here. The songs chart all the heart ache, lost loves, and loneliness that bluegrass is famous for, with nary a wink. The narrator of “Demons” finds his nemesis lurking in a bottle, high-heel shoes, rolling papers, and blues songs. The narrator of “I’ve Been Redeemed” has committed a wealth of sin which sadly goes unnamed. We’re left wondering what it was that he did. Must have been pretty bad. Though, unlike the narrator of “Lonesome,” it hasn’t landed him in prison, at least not yet anyway.

There’s a bit of insomnia to go around. The narrator of “There is You” lies awake at night thinking of the woman who clearly has had enough of his funks. The narrator of “Beer Tree” is awake at 2am wondering why beer doesn’t grow on trees. It’s clearly intended as a moment of levity, but it doesn’t work as well as it could. Given the alcoholism elsewhere in this album, the thought feels a bit unsavoury.

Ultimately, all of this risks giggles in places, and for reasons, that perhaps weren’t intended. The ending of “Pathway of Teardrops” loads one clichéd ending on top of another, becoming quite a brilliant parody at the end of a song that really isn’t intended to be one.

To be fair, the players here are expert, and musically there’s a lot to love. The only thing that doesn’t quite work with “Lynchburg Chicken Run” is the title. It’s the only instrumental, which too bad. It’s a great one, and would that there was at least one more.

Elsewhere, the lyrical content—all the bottles and broken hearts and church pews—doesn’t quite reach the mark, which perhaps is to tell a story, or bring a new idea to the table. Instead, it’s is as if the band wanted to write some bluegrass songs, so that’s what they did. I think Grascals fans will like this one, but it’s not the album that’s likely to grow their audience much. Which is too bad, because they are so adept at their instruments. They just need better material.